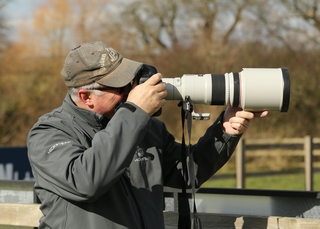 When I was 17 years old, my late Great Uncle Len left me £250 and I bought my first SLR camera. It was a Konica TC with  a 50mm lens. Great Uncle Len was a First World War Pilot Photographer talking photographs over the trenches, including the Somme, in an open cockpit bi-plane from 12,000 ft.

Several years of photography followed, alongside a career in Office Products, until my passion for photographing horses began.

I have been photographing people riding their horses since 2004. I have been the Official Photographer for the Kent and Surrey Bloodhounds since 2005. I have worked for Hickstead in the international Arena for 7 years and have been the Photographic Steward since 2012. This is a very challenging role but extremely exciting and enjoyable. I have been covering the eventing season for Point Two Air Jackets since 2012. In 2013 I was appointed as the Photographic Steward and Press Photographer for the Horse of the Year Show (HOYS). This is five days of non-stop photography which starts about 6.45am and finishes sometime after midnight!!

Weddings, Proms, Hunt Balls, Parties, Fun and Commercial Studio shoots have now been a feature of my work since 2011.